How to: Make Salted Salmon (shiozake) 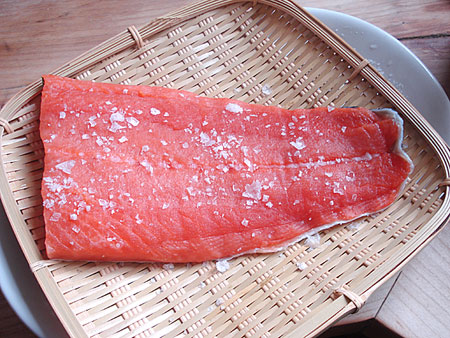 Salted salmon, called shiozake or shiojake （塩鮭）, is so ubiquitous in Japan that when people just talk about "salmon" (sake or shake) they are usually referring to the salted kind rather than the raw kind (which is specifically called namazake（生鮭）). Salted salmon is a staple ingredient of bento, used as an onigiri rice ball filling, flaked on top of or mixed into rice, or just grilled. 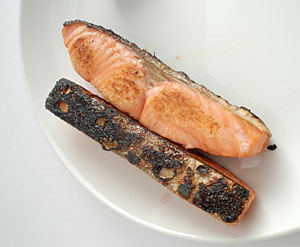 Salted salmon is cheap and easily available in Japan, but not so outside of Japan. So I've been making it myself for some time now, and it's quite easy. All you need is a typical refrigerator that has low humidity. (If yours doesn't have excess condensation in it, and old leafy vegetables get dessicated in the corner of your vegetable bin, then it's ideal.)

You must start out with good, fresh salmon. It should not smell at all fishy, and it should be firm to the touch. Wild salmon is best, but farmed salmon is ok (the latter is a lighter pink in color). Get a filet, boned or unboned, skin on (it tastes better when it's grilled with the skin on). Pat the surface dry with paper towels, then salt both sides with sea salt. I prefer to use Maldon Salt because the flat, large flakes stick very nicely to the fish, but any good sea salt will do. Be fairly liberal with the salt, so that the sides are well covered.

Wrap the salmon loosely in several layers of paper towels, then place the whole thing on a non-metal draining surface of some kind, like a colander or a sieve. I use a flat bamboo basket but something like a plastic vegetable spinner basket will do. Place that on a plate to catch any drips, and put the whole thing in an undisturbed place in the refrigerator, for at least 24 hours. The longer you leave it and the more it's salted, the saltier it will be. Don't leave it more than 3 days though. 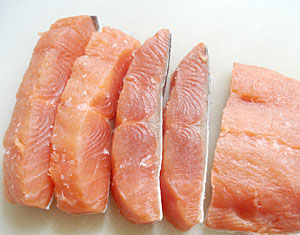 After 24 hours or more, unwrap the fish from the paper towels, which should have absorbed the excess moisture. The fish will be a deeper pink/red. Pat off any surface moisture, and cut it into pieces. Wrap each piece well in plastic and store in the freezer. It will keep nicely for a couple of months.

To cook the frozen pieces, place on an unoiled nonstick frying pan skin side down, put on a lid and let heat through at medium-low heat until it's defrosted and cooked to the center. Turn a few times. You can also cook it on a grill pan. Or, wrap in foil and bake in a toaster oven.

(In the U.S. Maldon salt is available at gourmet stores, or online at Amazon . In Switzerland it's available at Globus. In the U.K. I think it's quite widely available, but I have seen it for sure at Waitrose. It is pricey, but for certain uses it's terrific.)

Type:
how-to
Filed under:
johbisaistaplefish
‹ How to: Homemade shio kombu or kombu no tsukudani up Individual portion frozen shepherd's pies (or any kind of casserole dish) ›